Skeletons in the closet of US Attorney Prosecuting Hal Turner

During Turner’s second trial last week, Mr. Hogan introduced “evidence” from Turner’s web site dating all the way back to the year 2002. He even stooped so low as to raise an issue about a Letter-to-the-editor of a local newspaper Turner wrote in the year 1998.

None of Hogan’s “evidence” had anything to do with the charges against Mr. Turner, but Hogan used those pieces of “evidence” to muddy-the-waters in Turner’s trial. Clearly Hogan was trying to get the jury to Hate Mr. Turner so as to wrongly convict him. Hogan’s effort failed – again. The jury in the second trial was hung with the vote being 10 – 2 in favor of ACQUITTAL.

Seeing as Mr. Hogan thought it proper to dig into Hal Turner’s background, we decided it might be interesting to delve into Mr. Hogan’s Background. So, we did.

Oh, what a treasure trove of dirt we found! It turns out that Assistant United States Attorney William R. Hogan has quite a shady past.

Hogan has been with the US Attorney’s Office in the Northern District of Illinois (Chicago) for many years. In that time he developed a reputation as a man willing to win at any cost; even if it meant allegedly bribing witnesses, committing fraud, lying to juries and allowing inmates who “snitch” to get sex, drugs and unsupervised telephone access!
On at least one occasion, an inmate-turned--snitch was brought to the US Attorney’s Office where he was later caught having sex on the U.S. Attorney’s conference room table with his girlfriend! For Mr. Hogan, it didn’t seem to matter as long as he won.

While such antics didn’t seem to matter to Mr. Hogan, they mattered to the Illinois State Bar Association. A State Ethics Panel filed Ethics charges of fraud and suppression of evidence against Hogan for his alleged role in the botched prosecutions of El Rukn street gang members.

The ethics accusations against Hogan - the lead prosecutor of the El Rukns from 1988 to 1993 - allege that he withheld evidence from defense lawyers, made inaccurate statements to jurors and later gave inmates unfettered access to sex, drugs and unsupervised telephone use so they could run their street gang from the US Attorney’s office!

The most damning allegation - that Assistant U.S. Attorney William R. Hogan Jr. knew about positive drug tests of two cooperating witnesses and failed to tell defense attorneys about it!

The uproar over Hogan’s conduct was so serious that a federal judge threw out three El Rukn convictions which triggered a litigation nightmare that reached far beyond three defendants.

Defense attorneys said the judge's ruling could be the "death knell" for 34 other El Rukn trial convictions, spur the reversal of witness plea agreements and prompt motions in other cases - including an Operation Greylord case, the John Cappas investigation and a civil case involving a mob trial.
"It has tremendous implications," said law Professor Richard Kling, one of three attorneys who won new trials for El Rukn gang members.

After a nearly three-year probe, the U.S. Justice Department fired Hogan then fought to keep secret testimony by FBI agents and other witnesses called during the investigation.

As most common folks already know, the legal system is infested with sleaze and back-room-deals. A couple deals later and all of a sudden, Mr. Hogan got his job back. Evidence of any wrongdoing was quietly squashed and Mr. Hogan had to lay low for awhile; obeying the rules and minding his P’s and Q’s.

All that changed with the trial of Hal Turner. It seems Mr. Hogan – who probably should have been disbarred – is back to his old tricks.

During trial #2 in the Hal Turner case, a particularly intense confrontation took place between Mr. Hogan and Mr. Turner. While Turner was testifying, he hinted that the financial records from the FBI were not complete Hogan asked “Are you suggesting my office has withheld evidence? Turner shot back “Yes.” Then let loose with a litany of proof.

Rather than describe it, we’ll let you read the actual court transcript to see for yourselves, then we’ll continue this story below. . . . . 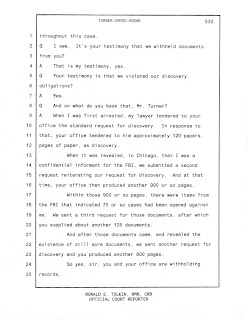 Well, well, well. Old habits seem to die hard. Based on what’s in the court transcript above, it seems that Mr. Hogan is back to his old habits of suppressing evidence and lying to juries.

Hogan knows his case against Hal Turner is pure trash. He knows that Turner merely advocated violence in a context that did not lend itself to imminent lawlessness. He knows that such advocacy is protected by three separate US Supreme Court Decisions: “Brandenburg v. Ohio” “U.S. v. Watts” and “NAACP v. Claiborne Hardware.” But Mr. Hogan doesn’t seem to care about those rulings. He’s apparently trying to blur the line between advocacy and “threats.”

The only problem is, if he’s successful, it will forever smash 50 years of rock solid free speech case law. And if he gets away with it by successfully criminalizing Hal Turner’s opinion, then his brethren in other US Attorney’s Offices will be able to criminalize EVERYONE’S opinions.

Mr. Hogan opened the door to Hal Turner’s past. Turnabout is fair play.

The best part is, there are far more skeletons in Mr. Hogan’s closet. His Divorce is particularly dicey, but we’ll leave that alone; at least for now.

Hal Turner is not alone in this fight. His family, friends and intelligence operatives he worked with for years, are in this fight too. If cunning misdirection and sleazy character assassination is the path the government chooses to pursue, they’d better realize such tactics work both ways.

Everybody has skeletons in their closet. As we’ve just shown, we can dig them up.
If you doubt the facts herein, read about them for yourself in the New York Times and elsewhere, below:

Posted by Family of Hal Turner at 4:10 PM

The Family of Hal Turner, in cooperation with friends and allies, are pleased to announce the renewed availability of Hal Turner's past radio shows.

Thanks to the good folks at SolarGeneral.com, many (not all) of Hal Turner's radio shows from the years 2001 through 2009 are now back online and available to you, FREE!

As most of you know, Hal Turner was arrested by the federal government last June over an editorial he wrote about 3 federal judges. In that Editorial, Hal took issue with a ruling by the 7th US Circuit Court of Appeals in Chicago.

Hal referred to three Judges as "traitors" and "tyrants." He quoted Thomas Jefferson who wrote "The tree of liberty must be replenished from time to time with the blood of tyrants and patriots." Hal went on to say "Let me be the first to say this plainly, these judges deserve to be killed. Their blood will replenish the tree."

The FBI claims saying the judges "deserve" to be killed is a criminal threat to actually go kill them. Hal Turner says "deserve" is merely an opinion, protected by the First Amendment.

He went on trial in December, 2009, but the jury was "hung" with a vote of 9 to 3 in favor of Acquittal. Because the jury was not unanimous, the judge declared a mistrial.

Hal went on trial again in March, 2010. The new jury was hung by a vote of 10 to 2 in favor of acquittal. Once again, the Judge declared a mis-trial.

Hal is scheduled to go on trial a THIRD TIME on April 12.

Since the government is so incensed at what Hal Turner had to say, we decided to make his past radio shows available to all of you to enjoy once more. It's just our way of sticking our finger in the government's eye.